Welcome to Beer Tastings, a series in which Utah Beer News highlights an interesting (and tasty) local brew. This time: Monolith Barrel-Aged Imperial Stout from Proper Brewing Co. What are you drinking? Let us know!

A brewery’s first barrel-aged beer is something to savor. Especially when the brewery’s track record is stellar.

Proper Brewing Co., which opened Utah’s smallest brewery (at the time) six years ago, is now flying at warp speed.

And now, a barrel program that in one way is just beginning, and in other ways is an aged veteran.

Monolith, a barrel-aged version of Proper Brewing’s Grand Sláinte Imperial Stout, is a limited-edition brew you’ll want to get your hands on (available Nov. 15).

It sat for about six months in four oak barrels that originally held Grenache wine. After that, rye whiskey. Monolith is a worthy successor.

The full-bodied chocolate brown stout features a smooth layer of tan foam. It emits stone-fruity aromas. Flavor-wise, I picked up a decent dose of vanilla and some oak, as well as dark jammy fruit (dark cherry, plum). It finishes with a hint of spiciness from the rye.

It appears to have soaked up a fair amount of Grenache. Brewers said Monolith went right on top of whatever rye remained in the barrel, giving the beer a touch of spice that cuts the sweetness nicely.

The beer told the brewer it was ready in mid-October. It landed in 22-ounce bottles a week later, got a celebratory cap of wax in early November, and goes on sale to the public on Nov. 15 at Proper’s bottle shop ($13.99/each; four-bottle limit).

It’s the brewery’s first barrel-aged brew, but it certainly won’t be the last.

“I’m really trying to open this up next year and get our barrel program moving,” Bunk says. “It’s been fun. I’m really excited about (Monolith) but I’m also excited about barrel-aging beers other than stouts.”

Jack Kern, Proper Brewing’s head brewer, appreciates the nuances to barrel-aging beer. It’s not simply “fill it and forget it.”

“The perception in the market is the longer the better,” he says. “You can over- or under-barrel-age. Jeff is really well-versed in making sure we’re on top of it and it comes out right at the prime time when it’s going to taste its best.”

Kern, a Proper Brewing veteran who recently became head brewer after co-founder Rio Connelly stepped back from day-to-day operations, remembers talking about barrel aging its Grand Sláinte since the day the brewery opened. 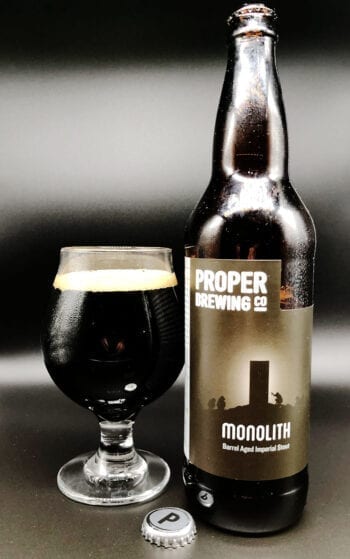 In fact, the name Monolith came to be after Proper’s initial batch of Grand Sláinte failed to ferment completely.

“We had this stout sitting in a tank that wouldn’t have been very good,” Kern remembers. “We pumped it into a big square tote and threw some (bacteria) on it. It’s a big, black square sitting in the back.”

It reminded Kern of the monolith depicted in the Stanley Kubrick film, 2001: A Space Odyssey.

“It’s hovering over us, somewhat ominously,” he says. “The monolith imagery suits the dark beer, as well as the mystique and evolution of this product.”

Or, go ahead and roll the dice and cellar it “to see what will come of its continued evolution.”

Either way, it’s a beer you likely won’t soon forget. 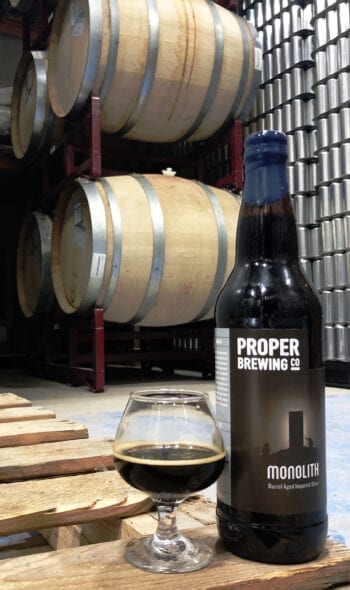 Product Description: Monolith is a barrel-aged imperial stout. The base stout is Proper Brewing Co.'s Grand Sláinte. Monolith aged for about six months in barrels that first contained Grenache wine and then rye whiskey.

Monolith is a barrel-aged imperial stout. The base stout is Proper Brewing Co.’s Grand Sláinte. Monolith aged for about six months in barrels that first contained Grenache wine and then rye whiskey. It’s a full-bodied stone-fruity stout with a touch of spiciness toward the end.

Notes: The tasting notes format is adapted from a Homebrew Academy Beer Tasting Mastery course I took in 2017. Utah Beer News received a complimentary bottle of Monolith for review purposes. A version of this article appeared on PorchDrinking.com. 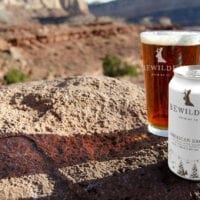 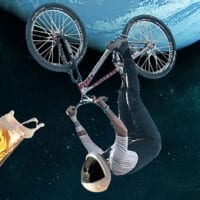 Welcome to Beer Tastings, a weekly series in which Utah Beer News highlights a particularly tasty local brew. This week we feature Proper Beer from Proper Brewing...
This site uses cookies. By continuing to use this website, you agree to their use. Read More Accept
Privacy & Cookies Policy