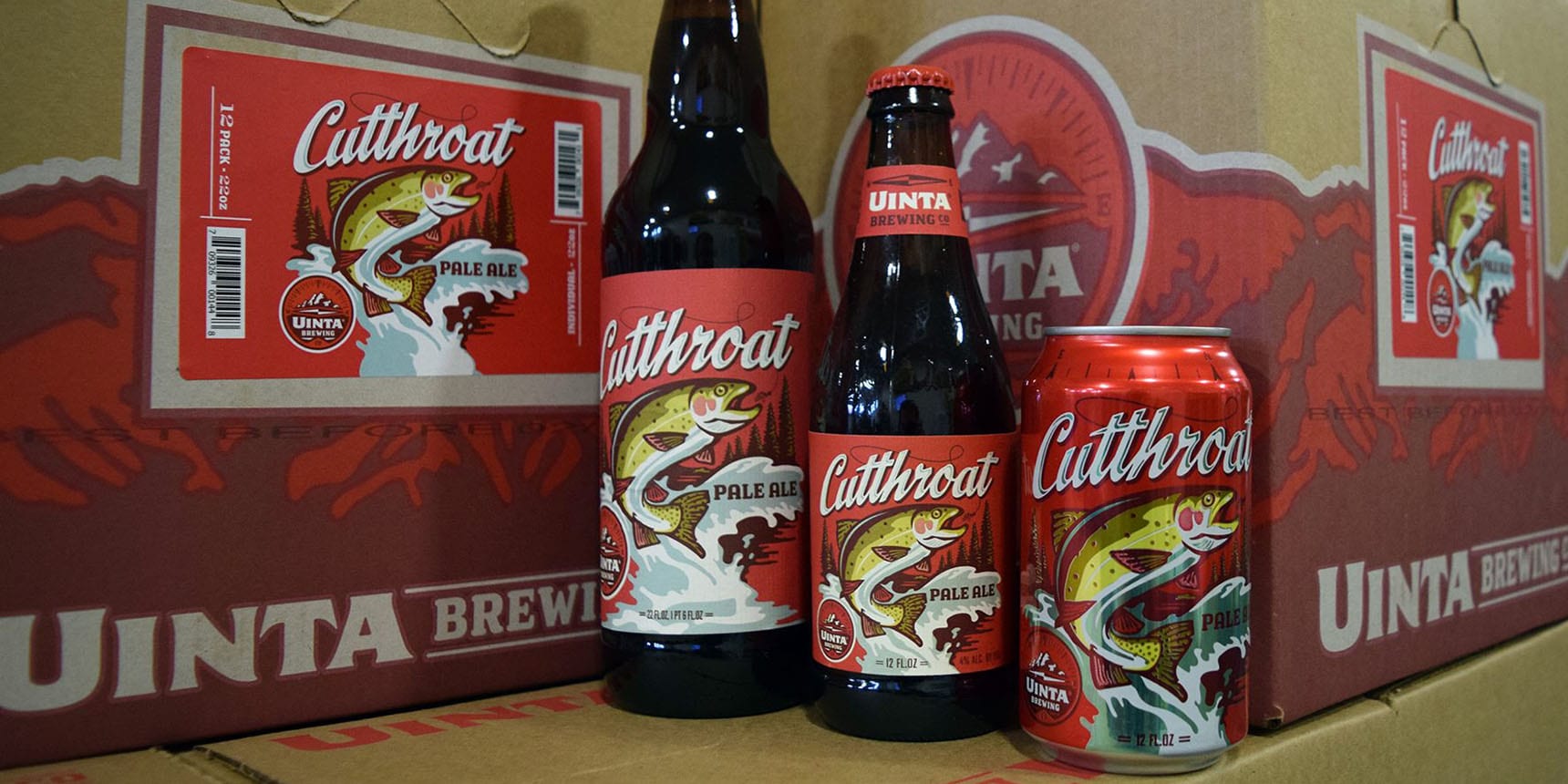 Uinta Brewing Co. is synonymous with the state it calls home. Locally, its best-selling beer, Cutthroat Pale Ale, is named after the Utah state fish. Many of its beers, in fact — Golden Spike Hefeweizen, 801 Pilsner, Dubhe Black IPA, etc. — also pay homage to the Beehive State.

Branding and overall corporate ethos embody an appreciation for the outdoors, which is near and dear for many Utahns. The Golden Ale Rotating Parks Series honors the nation’s national parks, five of which are in Utah. 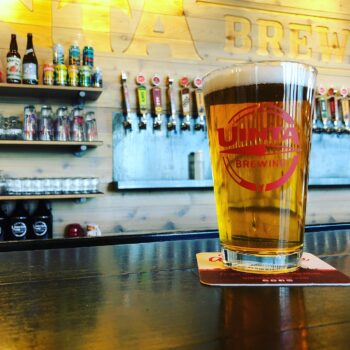 At sporting venues and during the state’s many cultural festivals, you can almost certainly count on Uinta on tap.

And, of course, there’s the brewery’s name. Uinta refers to a mountain range in northeastern Utah — the highest range in the continental United States that runs east-west.

Admittedly, Utah’s — and the nation’s — craft beer landscape is markedly different than it was more than two-and-a-half decades ago when Uinta brewed its first batches of beer. Back then, less than 500 breweries operated coast-to-coast, and you could count the number of breweries operating in Utah on one hand.

Yet, the trail that leads to success appears to be well-maintained for the state’s third post-Prohibition brewery and the first not initially connected to a brewpub. It’s a perennial Top 50 craft brewer and boasts the top-selling craft beer brand in Utah. Scores of awards speak volumes to the quality and craftsmanship of Uinta’s offerings. Innovative new beers continue to pour out of Uinta’s current facility, which is located just west of downtown Salt Lake City.

That’s not to say the brewery’s internal compass didn’t lead Uinta down some rough terrain.

In the Beginning: Earth, Wind, and Beer

Utah and its neighbors account for the lion’s share of Uinta’s sales, though the brewery has distributed to as many as 48 states. Utah’s quirky alcohol regulations, coupled with Uinta’s sole Salt Lake-based production facility, required the brewery to, in essence, create a “dual beer portfolio” to distribute throughout the country. It initially specialized in brewing beers at or under 4% ABV to serve the Utah market. 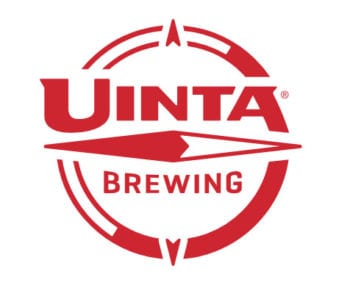 The regulations served up logistical challenges, certainly. But the brewery, which produced about 93,000 barrels at its peak in 2017, also recognized the vast distribution had pulled Uinta from its roots.

Still very much a national brand, Uinta is refocusing its energy on its “core region.” That includes supplying beer primarily to markets west of the Mississippi River.

From 15 Barrels in a Garage…

Uinta grew from a 15-barrel brewhouse in a mechanic’s garage in 1993 into a Brewers Association Top 50 craft brewer seven years running. The modern and efficient 120-barrel brewhouse now supplies a lot of beer. And the beers have earned plenty of medals, including 28 from the International Beer Awards, 14 from GABF, and nine World Beer Cup honors.

From the outset, a love for Utah, a thirst for adventure, and an appreciation of the great outdoors guided Uinta.

The long-running mantra “Earth, Wind, and Beer” underscores Uinta’s commitment to its core values. In 2001, the brewery became the first company in Utah to rely solely on wind power. Later, Uinta installed solar panels. The two renewable resources work together to power the entire brewery, which sits on five acres.

Similarly, Uinta believes strongly in giving back to its community — especially when it comes to environmental causes. The brewery contributes to several charitable organizations through its 801 Community Builder program. Clean air initiatives and environmental stewardship campaigns are Uinta beneficiaries as well, with focus pivoting in 2020 to organizations such as Protect Our Winters and Leave No Trace.

“We support organizations aligned with our core ethos,” Ragonese says. “That has a lot to do with sustainability.”

When it comes to Uinta beer, if you live outside Utah, you’re likely familiar with Hop Nosh. Craft beer enthusiasts highly regard — and highly rate — the brewery’s flagship IPA.

While the 7.3% ABV IPA is also popular within the Beehive State, Utahns are more inclined to think Cutthroat Pale Ale or Lime Pilsner when thinking Uinta. Those beers (the Utah-specific versions, at least) were for years 4% ABV. That means they are readily available on draft at most bars and restaurants in Utah. They’re also found in grocery and convenience stores statewide.

Hop Nosh, meantime, with its higher alcohol content, is packaged in 12-ounce cans and only available for purchase at the Uinta Brewhouse Pub, as well as bars, restaurants, or state-run liquor stores.

For outsiders visiting Utah for the first time (and for many in-state craft beer fans), there’s a perception that 4% beer can’t stack up against its higher-alcohol peers. It’s one reason why Uinta shied away from shipping 4% brews — many of which had won national awards — outside the state.

A Focus on Process

“There’s definitely a perception issue,” Ragonese says. “Even though we had spent years perfecting a diverse range of full-flavored, modest ABV craft beers, there has been a pervasive belief that these true sessionable offerings shouldn’t travel outside of the state. However, the national trend toward moderated consumption has finally opened up that possibility, and Uinta is uniquely poised to take advantage.”

Necessity, as they say, is the mother of invention. Since Utah law had required draft beer must be 4% ABV or less (a law that changed on Nov. 1, 2019, to allow for up to 5%), Uinta from Day 1 laser-focused its processes to pack the most flavor possible into a session-strength beer.

“Brewing within those parameters forces you to challenge yourself to make ever-differentiated and more flavorful beers,” Ragonese says.

Uinta Through the Years 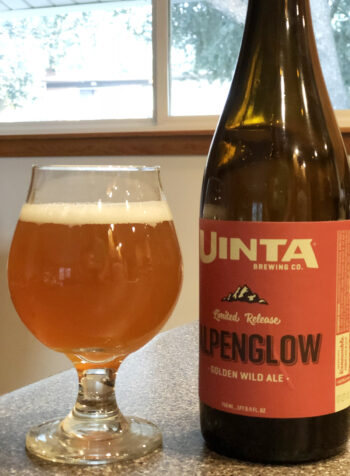 As mentioned, Utah now allows 5% ABV to be sold on draft and in grocery and convenience stores. The switch presented a golden opportunity for Uinta, which commands significant shelf space and tap handles among local craft brewers. Uinta reworked the vast majority of its current 4% recipes to clock in at or near 5%. It paved the way for Uinta to unite its core offerings into a single, multi-state portfolio.

But longtime Uinta fans understand the brewery’s portfolio encompasses much more than its draft offerings. As a pioneer in Utah beer, the brewery has pushed the envelope for two-plus decades. In addition to nearly 20 year-round beers, Uinta brews a half-dozen seasonals and several limited releases each year.

It began a barrel-aging program in 2009 and debuted its Crooked lineup of specialty beers in 2010.

Uinta reimagined and relaunched the line in 2018 in 12-ounce cans and bottles. It helps to provide consumers with easier access to the experimental and more adventurous brews.

All that helped to make Uinta the brewery it is today. And now, Ragonese is determined to propel the brand forward.

“I’m passionate about keeping our company healthy and providing a great environment for the people who work here,” Ragonese says of the 70-employee organization.

“In recent times we focused attention on supporting our rapid growth. Today, in the midst of a rapidly evolving industry, we’re committed to improving our business by focusing on the things that truly matter. We may not be the newest brewery in town, but we can certainly stand out for being the best.”

Like a hiker in search of adventure, Uinta is carving a new path that it expects will lead to an even more spectacular view.

Note: A version of this article originally appeared in a beer industry wholesaler newsletter in 2019. 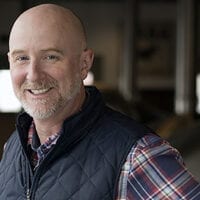 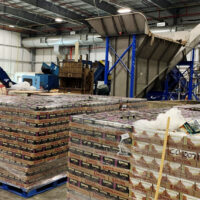 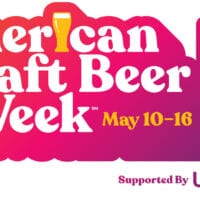